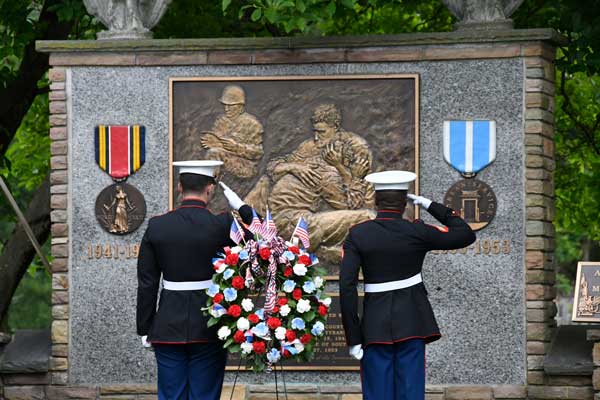 The 55th annual Memorial Day ceremony at Dulaney Valley Memorial Gardens will take place on Monday, May 30, 2022, at 10:00 a.m. The ceremony will honor service members with ties to Maryland who were lost within the last year, and pay tribute to all men and women of the Armed Forces who have paid the highest price in defense of the United States of America. The ceremony will take place at the Circle of the Immortals monument located in the Field of Honor Garden.

Honored at the 2022 ceremony will be:
U.S. Navy Hospital Corpsman 1st Class Sarah F. Burns of Severna Park who was among the crew members killed on August 31, 2021, in a helicopter crash during a Navy training mission off the coast of San Diego.
U.S. Air Force Airman First Class Dewayne A. Stevens of Chester, MD, who passed away on March 24, 2022, at his duty station at Nellis Air Force Base, Nevada.
U.S. Navy Lt. Junior Grade and Naval Academy graduate Aaron P. Fowler who died on April 17, 2022, during military training at the Marine Corps Base Hawaii.

The observance will include a wreath placement, tributes to those lost, TAPS, and a 21-gun salute. The United States flag will be flown at half-staff from sunrise until noon, per Memorial Day protocol.

The ceremony, which is open to the public and will also be live-streamed, will adhere to any Maryland/Baltimore County Covid guidelines in place at the time of the event.

“We are honored to once again gather as we remember the true meaning of Memorial Day, to reflect on the dedication of the military personnel who have died serving our country, and to express our gratitude,” said Jack Mitchell, President of Dulaney Valley Memorial Gardens.

Those who wish to watch the live-streamed ceremony online, can click on the link found atop our homepage ten minutes before the ceremony starts, or go directly to the live stream on our Facebook page: www.facebook.com/dulaneyvalleymemorialgardens.